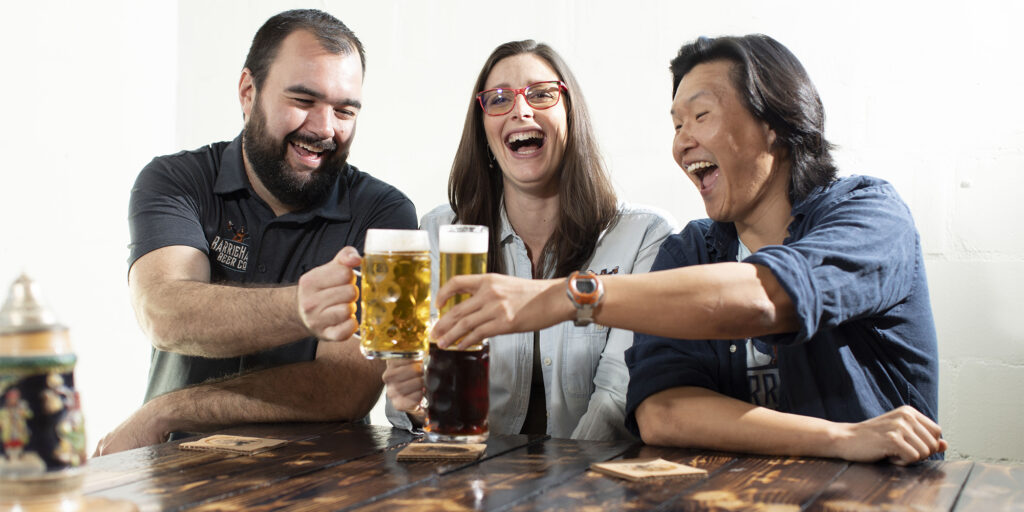 The co-owner and head brewer of Ybor City’s new BarrieHaus Beer Co., comes from a long line of beer-makers that started with his great, great, great-grandfather 150 years ago. In 1863, Barrie’s ancestor immigrated from Germany to Detroit, where he founded a brewery and helped introduce the lager style to American beer drinkers. Barrie’s great, great-grandfather then founded Tivoli Brewing, which was one of fewer than 100 breweries to survive Prohibition. Then in December 2019, Barrie, his wife, Brittney, and lifelong best friend, Junbae Lee, carried on the tradition by opening BarrieHaus — which focuses almost exclusively on lagers, a time-intensive style that many craft breweries choose to forgo in favor of ales. “The difference between lagers and ales, generally speaking, is the yeast that’s used,” Barrie says. “Ale yeast ferments warm, so it can be done quickly. Lagers ferment cold, so it’s the yeast that makes the difference. It results in that crisp, clean finish at the end [of a lager].” BarrieHaus currently has eight beers on tap (including a classic dunkel and an innovative orange-honey lager) plus a wine and cider, with several lagers available from slow pour taps that soften the beer’s carbonation level and create a denser, creamier foam on top of the drink. Beyond beer, the brewery hosts yoga, live music and a visiting chef every Sunday, with rotating events throughout the month. It’s clear, Brittney Barrie says, that Ybor City was the right spot for the team to set up shop. “It’s been really fun to be in Ybor, specifically,” she adds.

Here’s where to eat, drink and wear your mask during Oktoberfest in Tampa Bay

Alright people, Oktoberfest is back, but it’s different than ever before. COVID-19 has completely transformed